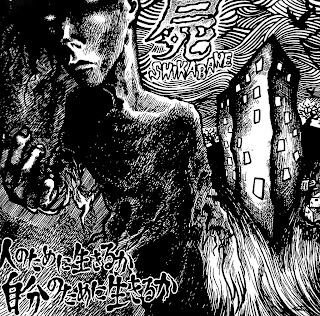 Shikabane releases are dropping out of circulation like crazy, which may mean there's a discography in the works, and certainly means that it's time for some posts. Being a huge fan of dark hardcore, it wasn't long before this band caught my attention. My first exposure was the masterful "Why Do You Live?" LP, which was enough encouragement for me to explore the band's back catalog, such as their split with Agathocles, and this slightly more mature CD, "人のために生きるか 自分のために生きるか." By the late 1990's, the band dropped some of their speed, and adopted their signature, ominous tone. So this CD is a transition point: it's fairly traditional Japanese thrashcore with some added gravity. As much as I love Shikabane's more complex recent work, these eight tracks are great in their own right.

You ALWAYS bring the good shit!

i didn't have this one - thank you.

Okay, now that the cobwebs have cleared: I listened to this today, and it totally slays. The drumming on Track 8 is out of hand, especially. They still sound familiar, though. Maybe from a comp. I have? Anyway, I'm an idiot, and this kills.

Rygar- Either you need more weed, or less, I can't tell. In any state of mind, Shikabane tear crap up! I'm glad you like this band... stay tuned for more!