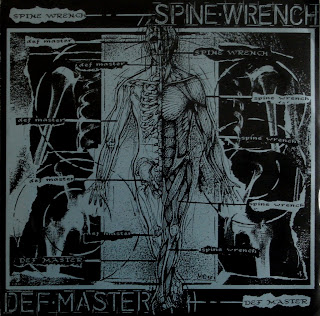 I hope to re-rip the two Spine Wrench EPs I posted a while back, and rip two additional ones in the next couple of weeks. In the meantime, this post concerns the two split releases the band did: their first outing, and their last. In case you don't already know, SW were a sludgy metal band with industrial leanings, but are best known as the band MID (Rob Middleton) formed after the demise of Deviated Instinct (you also may know Rob from his art which graced many famous Napalm Death albums, and from his current work in the band Bait). The first split of the day, with Def. Master, was Spine Wrench's last release. The one SW track is easily my favorite from the band's discography. Through the cold, industrial atmosphere tears some anguished vocals and gut-wrenching, string-bending guitar eeriness. Based on this last remnant, I really wish the band had kept going...

Japan's Def. Master are a whole other trip. Their hyper-kinetic, electro-industrial adrenaline shot is both seductive and nerve-wracking (in too high a dose). The format follows a similar pattern to their "Fear Of God" 7", both of which consist of one booty-shaker and one metallic head-rush. As can be expected, the tracks are layered with all manner of electronic bells and whistles to keep your warped neurons from their inevitable atrophy; yes, our species is "evolving" to where ADHD is becoming one of our essential qualities-- Def. Master has kept this in mind during the composition process. Get DM's split with the almighty Discordance Axis here and a couple more DM goodies here. 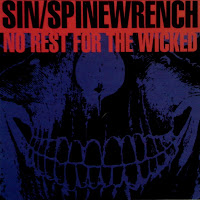 For no extra charge, you can also download the Sin/Spine Wrench (or Spinewrench if you prefer) CD below. SW showcase their usual awesome, throbbing, grooving metal. This also happens to be the only release with Charlie (ex-Deviated Instinct) on drums before he left and and was replaced by his mechanical counterpart. The songs are pretty good, and, for me at least, blow away Sin. Maybe I'm just not accustomed to the flat, anti-dynamic, industrial influenced metal those guys produced, but I get a little antsy listening to Sin. I don't know, maybe you'll like them more, but I usually skip to the SW tracks.


Both splits
Posted by Batguano at 8:40 AM

AH! It's my birthday all over again.

SW offer some great stuff. A bit of trivia, Sin was Al from Nausea's shortlived project after that band split. I had the fortune of hearing a bit before it was released and it sounded a bit better then. It sounds way to Godflesh-like and dated today. Thanks for the post, yet another great effort!!

No way! I had no idea about the Al connection; the packaging/info on the CD is terrible/nonexistent. I'm not too down with Sin, but I'm a huge Nausea fan.

Thanks for the info!

Pretty happy to find the split 7", I've got the cd and a couple of the other records. pretty underated i reckon.

Any chance of a re-up? The split with Def Master is down, as is the other one too.

Done! Download at will and let me know if you encounter any problems.