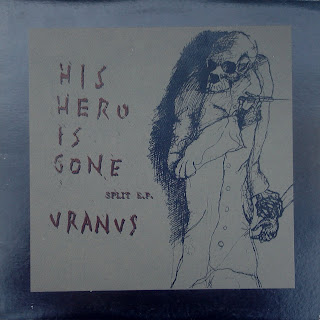 Hardly any one's enjoying the obscure stuff I've been posting, so it's time for a classic. The His Hero Is Gone/(Union Of) Uranus split 12" was one of the greatest things the nineties squeezed out of its fruitful, if irregular bowels. Whether everyone out there has these tracks already or not is irrelevant; I've always wanted to post this beast. HHIG were one of a few bands who revitalized my interest in hardcore at a time when I could have gone in some pretty embarrassing directions; so potent was their influence that here I am over ten years later, more enthused than ever about our little subterranean niche. They must have done the same for hundreds of musicians, as HHIG/Tragedy worshippers span the globe these days. Uranus' influence was more subtle, but they left their mark in a huge way too, and did so even more after their discography CD finally emerged from its icy, unmarked grave. The split itself was limited to somewhere around 500, and was sold exclusively on the bands' joint tour ('97? '98?). The Uranus tracks are of course compiled on their CD, but these recordings of the six HHIG ragers weren't ever reissued (don't quote me on that). These recordings also represent the last output by the line-up as heard on the "Fifteen Counts Of Arson" LP. The re-recorded versions (with new members, including Yannick from Uranus) would occupy the slab known as the "Fool's Gold" 7", which went through a confusing number of pressings on different labels. In addition to rougher sound quality, we're treated to a feverish, tribal-ish percussion intro that seems curious when held alongside the bands other work.

So, if you don't have these tracks, I've gone ahead and ripped this piece at 320 kbps, and included some pics of the insert and so forth in the folder (the photos didn't turn out great so I may post some better ones if the occasion should present itself).
Oh yeah, I forgot to mention that these are two of the most amazing and important hardcore bands ever!
Right... Here
Posted by Batguano at 7:49 PM

Dude it has been pretty quite around here and I apologize for not contributing a little more. At MR the main source of comments is age old friends, with the rest being fellow music bloggers like yourself. Yours though is one of the truly underappreciated blogs if not for the rare music, definately for your superior writting. I do some of my searching while at work (oops!) which is great for doing some reading of blogs like this, but the firewall and the fact that I don't have administrator status makes music listening impossible. I can't wait to get home to listen to this one. Thanx for all the hard work you put into this man, because your site is one of about five that is a daily visit for me. There is so much more here than just a link to a music download. Thanx again for that.

thanks so much for this... specially for the jpgs of cover and inserts. for some reason i only have the vinyl, my copy is numbered 570/500... go figure, maybe they only printed 500 covers. anyway, it's nice to see what i've been missing graphically.

His Hero Is Gone is one of a dozen or so bands that, while I am very familiar with the name, I don't think I've ever actually listened to any of their releases. Not for any good reason, I just get stuck in cycles of listening to a handful of bands I know and love for a year or so, and then I venture out to find new sounds. After discovering this newest form of music sharing, I'm blown away by the sheer volume of incredible bands out there. I always figured everything had been done, and done well, and I need not waste my time trying to find anything else I would enjoy. But blogs like yours, and a few others have shown me just what a closed minded know-it-all I can really be. Thanks again.

Hey Justin,
I don't know about underappreciated; I purposely post overlooked bands, so it sort of comes with the territory. In another comment box, we were discussing that it's about the quality of the commenters, not the quantity, and I've been pretty lucky that way.

Anyway, the burden of commmenting should not fall on you, my man. Most commenters are bloggers over here too... maybe we're the only ones who get nerdy enough over music:) I've been pretty busy lately myself, and have neglected my favorite blogs more than I'd like (such as MR, of course). I hope to change that soon. Thanks as always for your encouragement.

Javier- It's the least I could do.570/500!? This is the first I've heard of that happening. You're probably right... the covers were hand done, so maybe they didn't have time to make enough. And, yeah, each side is a different speed, and the labels are solid red. An absolute classic!

Rygar- I can't believe you've never heard HHIG! You've been missing out. Everyone has their opinion about which album is best... if you like more consistent and fast hardcore, start with "The Plot Sickens." If you like more metallic hardcore and unpredictable tempo shifts, start with the other two. Check 'em out though... super highly recommended.

And thanks for your kind words. I always hope to turn at least a couple of people onto new bands that I also like. Your blog is doing that for me, that's for sure. You have some new posts, I see... excellent! I was afraid you had already thrown in the towel:( I'll read up when I get home!