In A Glass Box Of Emotion! 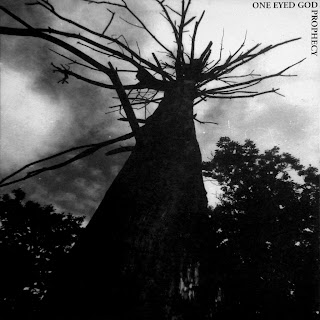 Jake sort of requested the One Eyed God Prophecy LP, or at least that's how I chose to interpret it. I was looking for an excuse to do so anyway... Plenty of blogs have probably posted this thing, but as you can see already, I don't care. OEGP were a brilliant off-shoot of (Union Of) Uranus who released this 6-banger and I'm not sure what else (I've heard there was a super limited fan-issued discography?). The band played screamy and chaotic hardcore, but to dismiss them as some "screamo" band would be to miss the point (whatever that may be). What sets the band apart is tough to nail, but each track is like the detail of a larger panorama... a dark one where people and objects are painted in the same impersonal gray. Beneath the surface throbs a pulsing knot of every human emotion imaginable, but instead of breaking through, it only moves the murk in mesmerizing waves and sudden convulsions. This is the songwriting of a band that both rejected and embraced its own moment in time and space, and created something lastingly powerful, if not beautiful. Follow its chilling and turbulent movements, and see where it takes you...

As with many records from my personal stash, this one has been a bit ill-treated and it shows in extra noise. Just thought I'd warn you. It sounds like it's been man-handled by a guy who got the munchies, ate an entire bag of hot Cheetos, and didn't wash his hand. I don't want to mention names, but let's just say his name begins with a B and ends in a -guano.

Thanks man, next time I'll be assertive with my request for someone to do the work I am too lazy to perform myself. :)

Yo, Jake, no problem. Requests are okay by me... at least that way I know I am posting something that someone appreciates and I don't feel like I'm just talking to my computer screen.

also, this band was unbelievable live. i saw them with like 6 people in a house somewhere in the southeast that i cant remember and it was nuts.

Ah yes, shows like that make me miss the '90's. I was never fortunate enough to see them or Uranus. I've seen footage on youtube, but it's so NOT the same...

hey man ..just to clear it up...Seb (ex-One eyes god) is a friend of mine and the said band never had any members in common with Uranus. That was just a scam from Yannick (great american steak religion records) to bring more people out to shows on their first (and only) tour. Sebastien is currently plying with other guys in a Sludge/ambient band called MEMORIES OF AN OLD MAN. Check it out ,they have a new album just out on D7i records from Quebec city.

I had no idea about this! Thanks for setting the record straight.