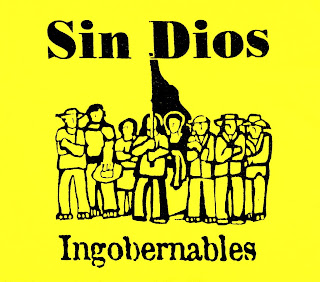 Hardcore has saved me on so many occasions. From what, exactly? It's hard to say, but I feel like the raucous hammering and screaming has kept my thinking somehow... clear. It started with Bad Brains and Void in my early teens; then it was Econochrist and Crimpshrine entering young adulthood; His Hero Is Gone more or less sealed my fate... but as I was entering my chosen career, it was my discovery of Sin Dios that may be responsible for keeping me on the path for life. Coming out of the decade that dealt the death-blow to "punk," everything in the independent music world seemed ruined by imitators and colored by irony. Enter Sin Dios, who was like a brass-knuckled fist up the ass of that way of thinking. 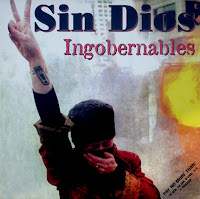 I was lucky enough to stumble upon them right when their masterpiece, "Ingobernables," was released. This was the first time the band felt the desire to reach out to the world beyond their compadres Españoles, releasing the album on German labels (Skuld & Twisted Chords) who in turn distributed it fairly well to all the global punk "markets." After about ten years, these anarcho-syndicalist punks managed to belt out hardcore anthems more explosive, full of conviction, and heavier than anything they had done prior. The lyrics and additional writings are full of the usual Sin Dios scholarship: rants about the virtues of the DIY ethic, topical diatribes on the state of European politics/direct action initiatives, and images/lyrics that show a strong atavistic connection to Spain's libertartian heritage. In short, these guys were the real thing- not just a bunch of fly-by-nighters sloganeering about nuclear war and such.

This post could be an album of the week post, since all 14 tracks are just awesome. I chose the first track, "No Te Rindas, " because its fiery message and energy encapsulates what this band and this album did for me at a time when the lure of the status quo could have easily won my soul. When you start to feel like there's nothing you can do to change the "way things are," and you're tired of making ironic remarks to cover up your sense of futility, crank this song about four or five times in a row...

sin dios is def one of my favorite bands http://www.youtube.com/watch?v=EvxzuKZqUfg

Yep, this band just completely shredded! That live clip is nuts! Thanks...