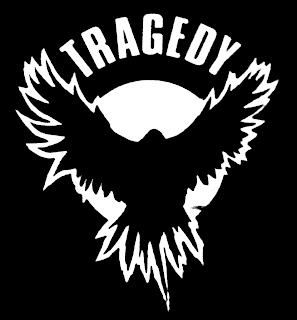 Since we're on the subject of Portland via Memphis greatness, how 'bout some Tragedy for the song of the week?! Sometimes I wonder if anyone listens to Tragedy, or if people just use their name to reference bands that sound like them. I would like to assume the former, because Tragedy is one the most sincerely powerful hardcore bands in the world today. Like many, when I heard the first Tragedy album, it had a similar effect as when I heard the first His Hero Is Gone 12"-- that is, it completely destroyed and rebuilt my life in it's 20 minute duration (part of that was just the joy of knowing these musicians were still at it). But when I reach for a record to play, it's "Vengeance" that I choose as a default. Not that the other two aren't completely awesome; they can stay over night at my turntable's house any day. But "Vengeance" was the record where the band took some time and space to explore their brand of bleakness on an epic level. The Swedish assault dominates many of the songs, but on a few, the band finds its way back to the heyday of crust with slow to mid-tempo ploddings. "Night Falls" is an excellent example, and when I think of this album, my mind immediately starts playing that simple and stark guitar riff with which the track opens. The word Heavy, and all of it's musical and emotional connotations also comes to mind. The listener is escorted with belabored and lethargic steps through an empty street in a war-torn nation. The tempo picks up when the soldiers come marching through, but as the lyrics explain, there will be no resolve for the sleepless masses who wait for peace in their darkened apartments. And you wonder why they chose their band name! But as the ancient Greek dramatists taught us, tragedy and catharsis are fairly inseparable.

If for whatever reason you haven't heard Tragedy or "Vengeance," I can't urge you enough to rectify that. Keep in mind that many of their songs are actually fast, unlike this one: 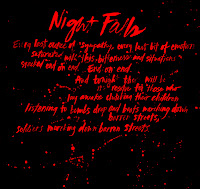 Labels: crust, hardcore, His Hero Is Gone, Portland, Song Of The Week

Everyone I know who actually LISTENS to Tragedy (as opposed to just REFERENCING them, like you said) prefers Vengeance to their other records. So no surprise on this post, but two thumbs up from me!

this is for you:

Thanks for reading and taking the time to comment BP-er. It seems that we're on the same page in many ways!

Papst- I feel like a little kid on Christmas Eve! Unfortunately, the firewall at work has chosen to block your blog, but not mine (you must have some "obscene" content... ha ha). I look forward to getting home this afternoon and reading... Thanks in advance!

maybe they know about the obscene content of my brain?

This is a random request and I'm not sure if you have it or not. I'm trying to find a good rip of Death Side's LP Wasted Dream. I'm not sure if it is still in print. I can't find it for sale anywhere. It seems every rip I've found is in 128 bit rate(boo)or has corrupted files that sound like scrambled ass. For the good reviews I've read about it, I'm surprised it's not on more blogs.
Anyway, yeah, Tragedy is the shit. More people should listen to them.

Hey Stranger... Unfortunately I don't own the wax on that one, but the rips I have on my harddrive are at 192 and are of OK sound quality. Let me know if you want me to upload...

Thanks. I managed to find a 192 rip that I can settle for until the day that I run across a copy in my record shop rummaging adventures.