Song Of The Week: "Wind Of Pain" (Bastard) 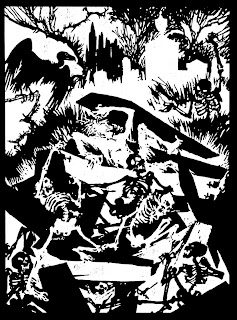 Post number 200 happens to fall on a song of the week night. I told myself I would stop counting posts, but Blogger makes it hard not to. So, what am I in the mood for... well, in an Immoral Squad post, I was praising bands that turn simplicity into power: Discharge is a classic example, and tonight's featured band may already be too. Bastard are often touted as one of the greatest Japanese hardcore bands of all time, and I certainly agree. As with many superlative bands from that country, the labels played the cruel joke of making Bastard's releases very limited. I was lucky enough to find a vinyl bootleg of their LP and EP recently, but if you want originals, just understand that you'll be paying in the multiple hundreds for either of them; luckily there's the blogosphere to the rescue. So what makes the band so great? Everything: the insanely thick and heavy guitar and drum sound, the pissed off, traditional vocals, the cranking riffs... the usual things-- just turned way up in quantity and quality.

There's not a single mediocre moment in the bands' discography, so choosing a single track really sucked. The title track to the band's LP "Wind Of Pain" will do nicely. When I throw on the album, I eagerly anticipate the fist-pounding main riff more than any other. Great hardcore should illicit a violent reaction, and this jam doesn't fail in that regard. Seek out this band's work if you haven't already!

Abso-friggin'-lutely awesome band. I never even came close to seeing them live but I can only imagine based on the 12" that they would pummel live. Top notch post!!

First off congrats on reaching 200 posts dude, you beat me to that milestone by about 8 posts. I've never heard of this band but these guys are massive. Hardcore but kind of a blend of crust and powerviolence at the same time if that makes sense. Thanx too for the link to more on downunderground, I missed have missed that one. keep em coming

Convertido- Awesome indeed! To see these guys live I would have to a wear a diaper... I can't even imagine how intense it would be!

Justin- When it comes to the straight hardcore, you're taste is usually spot on; no surprise that you dig the Bastard. They just get better with every listen (on high volume settings of course.).