Murder Is A Viable Option 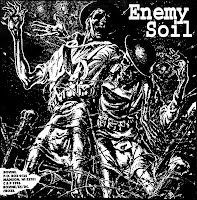 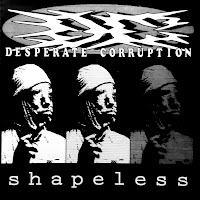 A big thanks to R'nR Steve who reintroduced me to Enemy Soil by hooking me up with the their semi-discography, "Smashes The State." I hadn't listened to these grindcore "legends" since they were still a band, and I have now seen the error in my judgement. I won't post the double CD, because it's still extremely available. However, I did find the band's split with Japan's Desperate Corruption for cheap, and am more than happy to rip it for the rest of you grind-heads. Enemy Soil recorded their three tracks with only two members, Richard playing all the instruments and Doshu doing lead vocals. The signature power, bitterness, and suffocating heaviness of ES's later work is written all over these songs. As most of you know, members of the band formed/joined a bunch of noteworthy bands like The Index, Pig Destroyer, Drugs Of Faith, Agoraphobic Nosebleed, etc. Desperate Corruption were not as prolific, releasing only a series demos and a few splits (as far as I know). These dudes definitely practiced their scales and listened to a ton of Napalm Death. Both songs are impressive, but I couldn't say for sure what DS is about because no lyrics are supplied. All in all, this is a great split, and grindcore bands that consider the bass a superfluous instrument might think twice after hearing these tracks.