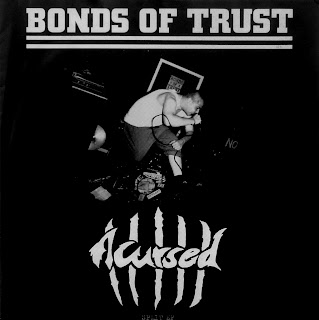 Lots of stuff going on today... First off, we begin the second installment of the week of splits-- a chance to showcase some treats in one of my favorite vinyl formats: the split (especially 7 inches). It also helps me put the piles of records I want to post into some kind of order. When appropriate, I'm also going to sneak in some reposts since I have a little vacation time on my hands and I'm really not going anywhere special. So the first post for this week of splits and reposts showcases of one of my favorite contemporary Swedish bands, Acursed. These scandi-thrashers made some international noise finally with the release of their Prank Records LP, but today's split sees the band in their early years working out their stiflingly heavy and fast hardcore barrage. All four tracks are great, as is everything they've done. Bonds Of Trust are also from Sweden, but judging from the block letter logo, giant X's on the members' hands, finger pointing, and song entitled "Floorpunch," you'd think they were some thuggish band from NYC. The music absolves their posturing, though, with some more blistering Swedecore not unlike that delivered by their split-mates. There are no lyrics supplied, but I get the feeling that's probably a good thing. The music is great and meshes well with Acursed. Really good split! 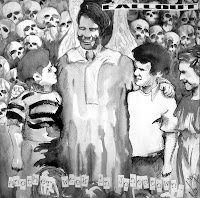 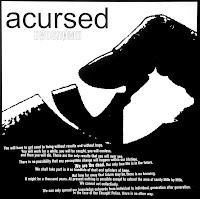 Act now, and you can get this re-ripped version of the amazing split between Acursed and Australia's Fallout. You should already know Acursed, and I promise their side will level you. I can promise the same for Fallout too, even though they have kept a low profile over the years. Just know that Fallout are one of the most underrated/under appreciated metallic "Powerviolence" bands out there, and mix adequate amounts of Siege/Infest aggression with a generous chaser of chunky/sludgy Dystopia heaviness. No bullshit... :

i was checking this out, but finally being able to get a copy of the bonds of trust split after a necessary sale of my whole collection years ago........ love.

Happy to reunite you!

Any chance of re-uploading the Acursed/Bonds of Trust split please? Thanks in advance.

Bonds of Trust split has been re-uploaded!