The Beginning Or The End: Contrast Attitude & Acrostix 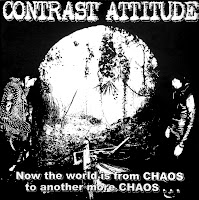 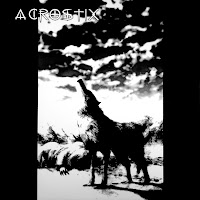 Split week concludes today with a nice 12" (Crust War, 2004) slab of modern Japanese crust! Both bands are rather different in style, but complement each other nicely. We are first worked over by the distortion suffused thrash ambush of Contrast Attitude. One could say that they sound like a noisier AGE, or a cleaner Disclose, but to me they're just an awesome hardcore band! The hints of discord and tight/energetic drumming really make this band stand out from the faceless crowd, as do the sincerely pissed-off vocals. Yep, this is how it's done.
I can anticipate some... "contrasting attitudes" regarding Acrostix. The three tracks herein come from the days right after or before the "Amebix Japan" comp, and, well, these dudes display their Amebix patch prominently on their torn and frayed sleeves (so to speak). A fan could say that Acrostix pays homage to or celebrates Amebix's style or influence; critics may quip that they brazenly plagiarize to mask a lack of creativity. Let's just say for now that they "appropriate" generously and audaciously from the venerated crust legends, a like scenario of which hasn't been witnessed since the Zoe LP. When you listen to the tracks, the musical shop-lifting will be all too noticeable, but as a preview... the tracks are called "Awave!" (?), "The Biginning (sic) Or The End," and "Eternal Winter," and the members of the band consist of Sin The Baron and Spider77 among others. I was happy to see that Acrostix did find some originality recently as can be heard on their 7" and LP (which of course I recommend). The tracks posted below create a problematic, if slightly awkward listening experience; the main problem ironically being that it's hard not to love it.
The split
Posted by Batguano at 10:02 AM

noone does this whole 'plagiarizing' thing better than the japanese and to tell you the truth i'm really lovin'it.they're doing it with such passion and conviction that i can't resist. Anyway,i'm new to this blog and i'm really enjoying it.going through your archives i have found so much great music from bands that for the most part i didn't know of.and it's great that most of them are from the 90's and 00's.as much as i love 80's punk,hardcore and metal,music didn't stop in 1989.thank you very much and keep up the good work.

Hey Chris, I'm happy to hear that you found some new stuff to listen to. I pretty much agree about the love Japanese bands bring to the table... it's obvious to me that they're not "stealing," but rather praising their biggest influence. Still, I like Acrostix's newer work because it sounds more like their own.

Anyway, good to have you aboard!