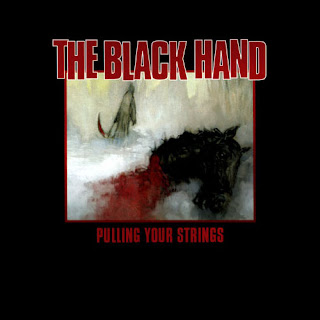 If members of His Hero Is Gone, Slayer, Uranus, and Suicide Nation vacationed in the same Canadian ski lodge and were trapped in by an avalanche for 12 or so hours, they may have produced something like The Black Hand's demo, "Pulling Your Strings." The band itself has nothing to do with the others mentioned, but is related to Ire and Cobra Noir. Dig hard enough and you'll find a composite of all kinds of metal (namely, thrash, black, and speed metal), and various forms of modern hardcore and crust. But you won't have to dig too far to know that these guys are proficient as heck with their instruments and can write incredible songs. Hell, just listen to "Disburden" and I can almost guarantee you'll be hooked. Scorched Earth Policy Records re-issued these four tracks on a 10", which is what I've ripped for you tonight. Before closing shop, The BH also fired out an incendiary LP and one comp track that I know of. I still think these four tracks are my favorites:

Thanks for posting this - I didn't have it - as well as the mention...

It's sacrilege to talk about these guys and not mention Catharsis!

I will say that I think Radwan is a better guitar player than vocalist, but this is essential Canadian hardcore.

thanks so much for this. the black hand is so damned nifty even my mother would probably appreciate them.
mike.

this is some really great metallic hardcore!thank you very much.

If you're anything like me, you've been looping "Disburden" repeatedly all week!

@ yrfkt- this isn't the first time I've been accused of sacrilege; Well, maybe as it applies to music...

But yeah, I see your point about Catharsis.