Song Of The Week: "Begin To Breathe" (Initial State) 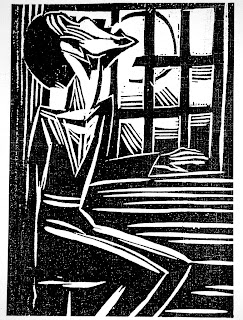 I was on the bike, waiting at a signal last Sunday afternoon. The track list on the pod was finished, the light was changing; I had to choose a band quick. The reflexes didn't delay or fail me: "Abort The Soul" by Initial State it would be. And, for the hundredth or so time, I came to the same conclusion-- this has got to be one of the all time most powerful hardcore records! I've never pedaled so hard and furious in my whole life!

If you've had a chance to skim around this sight, it isn't surprising that Initial State shaped my musical expectations for the last 13 or so years. The band was basically Antischism after years of having endured a few beatings from life and getting their hides toughened and thickened in the process. 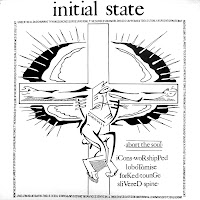 The result was a name change and an album of such dread-inspiring conviction and power, that the band probably figured it would be pointless to try to match it with a follow-up (just a theory). I could let the adjectives pile up: urgent, bleak, noisy, heavy, fast... they all apply to Initial State, yet none of them are quite adequate. To sum up the desperate mission of the band, I offer my favorite track, "Begin To Breathe." It also illustrates the band's ideas about humanity's future. While I don't quite subscribe to their primitivist bent, during the time that this song arrests me in its clutches, I'll practically believe anything they tell me! 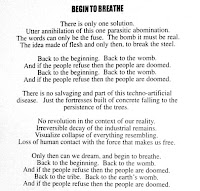 This is easily an album worth owning, so fork over some coins to Prank Records or your favorite distro and get a copy. I've owned 4 myself over the years: The original pressing on Clearview Records, The Prank CD (sat on/broke it), the Prank LP first edition (Clearview sleeves with electric tape cleverly covering the old address/clear vinyl), and the more current LP (sold it after finding the former item in the list for cheap). So, yes, I think I'm obsessed with this album! Members are/were involved in notable bands like, Chronicle A/D, Institute, Guyana Punchline, etc.
Posted by Batguano at 8:48 PM

I've had this LP for quite a while now, I'd love if you were willing/able to post the whole album for download so I could also listen to it on my bi-pedal commute and such.

Keep up the great work with the blog!

I have to say that of all the records we released this was the one of which I am most proud. Scot, Lyz, and Kevin were my roomates for a short time and remain incredibly wonderful people. I had the fortune of seeing some of these songs develop with their first bass player Russ. I still contend that the songs were more powerful with him as he was a monster and very emotional player. It is fair to say that the record reflects not so much their experiences since Antischism, but the amount they improved as musicians/artists. (I personally think that they were pigeon-holed somewhat by Antischism. People can be too closeminded sometimes.) Sadly, they only played live four times (lucky bastard that I am, I saw three) and called it a day. It seems that they all went their separate ways after the band died. Originally, they moved to Dallas after receiving dubious advice and then left for Georgia to re-unite with Matt, their old bass player, which ended badly as well. Coupled with the fact that they were hit by a drunk driver along the way and well... Again thanks for publicizing their music, and I did not know about the first Prank press using covers with our address on it. Oh yeah, I enjoy your blog keep it up.

Hey Convertido, good to see you back! And, good call on releasing this... quite a phenomenal piece of work!

And, yeah, I didn't mean to lump IS and Antischism together, but when 3 members reunite to play, you can't help but notice stylistic similarities. IS was definitely a unique and awesome beast in its own right!

As far as that weird Prank first edition... I found it in a local used bin: white covers, clear vinyl, Prank engravings, black/silver labels, electric tape covering the address. I'm curious how that all came to pass...

I spoke with my buddy who did more of the business end of the label last night. He said that a few years back Kevin called him about getting the artwork for the LP/CD back. Kevin said that Prank was thinking of re-releasing the album, so my buddy offered to send him 1000 covers that we did not like and did not use when we originally released it. I think that is how the first press came to have the Clearview address.
Thanks for the compliments about the project. Kevin did the artwork for it. I think that I never met a more creative person in my life. We rarely ever received compliments for the label. As a result, I am always a bit touchy about the label as well. It seemed for some reason people always liked to make snide remarks or digs at my buddy and I. I remember Chris Boarts reviewing the Dropdead LP in her zine "Slug and Lettuce." she gave it a great review but finished with the sentence that it would have been a better release if it had not been on Clearview. We only had one policy we put out the records we wanted to buy. This often meant that they were not immensely popluar or in with the MRR/Profane Existence crowd. Oh well...
I like many thought IS would be Antischism part two until I heard them. I interveiwed AS once when they played Dallas in 90 or 91. I found them sincere people but years later when I met them again and shared a house with them for a few months they had changed. They never lost their sincerity but I think that they moved away from the AS sound into something a little more experimental or creative. They also seemed a lot less concerned with what else was happening around them musically. I remember sitting in the living room wathcing Kevin create the most unique electronic sounds with the TV remote and his guitar. I would have been more entertained but I had been waiting to change the channel for 20 minutes :)
I wish more people could have had the chance to experience them. They were never the jump around and go nuts band, but their music was so much more emotionally intense live than on the record. I saw their first three shows and only saw a video of the last and I think that it is fair to say that at the end it was over. They still played the best they could but they did not look as into it.

Convertido... It all makes sense now! Thanks again for clearing things up.

I'm kind of surprised that Chris would say that. I guess you were right about people being close-minded. I've had the first Spazz CD and that Dropdead LP for a long while now, and they only made me more fond of the label!

Yes, We just re-used the ( error) white Covers Kevin was sent with a Sticker over the Clearview address. They were later re-done with a brown sleeve and printed address. The CD's were done at Fireproof press, same as the Clearview press, though they are out of business and any subsequent press will be a standard Case.... Despite being the missing link of the whole " '90's Southern downtuned Crust" sound -Damad, HHIG , Initial State don't really get the due they deserve. Scott once said " it was the first record We did where What we thinking in our heads was how it came out" or something to that effect.

The biggest change between the Clearview Press and the Prank one is the remastering- there's no mids in the Clearview mastering, which makes it sound even crazier.

Thanks So much for linking to my site. We still offer this record at a low PPD price and the support helps us get to the next band, record and release.

Thanks for the additional info! As far as linking you... I try to help the bands and labels as much as I can.

Oh, I heard rumor that you'd be putting out the Zero Hour discography. Is there any truth to that?

Hi, my name is Russ, I used to play bass in this band. If anyone's interested, I've got a handful of shows we played in and around Dallas/Ft Worth on video. I'm in the process of transferring various shows from different bands I've been involved with to DVD, and would be happy to hook anyone's who is interested up with a copy. Just email me at mason8174@gmail.com. Also, thanks very much for the kind comments, particularly to bunnypuncher - it's always been a regret of mine that I didn't stick around to record the album with I.S., after several months of developing those songs it was sort of painful to not be involved with the recording! Anyway, cheers and thanks for the kind words.