Saving Us From The Abyss Of Forgetfulness: Dir Yassin 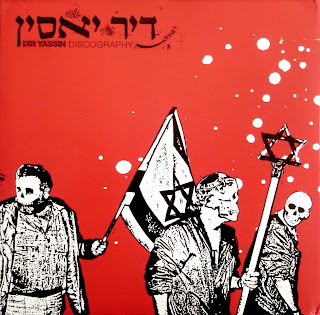 How's about a timely and topical post on this oddly hot January morning (down here at least)?! In the Mediterranean region, I bet they're having similar weather. But while some of us are losing jobs and tightening our budgets, there's some serious shit going in that boiling crucible of the Middle East. Hence today's pick, Dir Yassin. For the five or six of you who don't know, DY was an anarchist hardcore band from Israel whose method certainly abides by the shorter-and-faster-is-better theory. Punk, fastcore, old school hardcore, modern touches of dissonance (on later tracks).... it's all here. Born Against meets Seein' Red? Okay, I'll go with that. But I think the band is more concerned with words than music. This "Discography" LP (Alerta Antifascista/Tofu Guerrilla Recs) is beautifully packaged in a gatefold sleeve and includes an attached, full-size booklet with lyrics (in English and Hebrew) and other writings. The primary concerns of the band are pointing out the imperial arrogance of the Zionist state, and achieving justice for the Palestinian people. They don't offer too much in the way of a solution to the last problem, nor do they discuss their views about "militant" groups like Hamas. But, hey, a burden of such enormity shouldn't fall on the shoulders of Dir Yassin anyway. I've done my best to reproduce the booklet in photo form in the folder below. There are some other interesting discussions as well, including one about whether or not western nations should impose "democracy" and their version of human rights on non-western ones. Yeah, it's heavy stuff for the weekend, but we can't be ostriches all the time here in the USA; especially since our tax dollars make up a huge portion of Israel's military budget.

Peace in the Middle East. (The 46 track Discography ripped at 256 w/booklet)

According to Alerta Antifascista Records, this is out of print; if you like it, I highly recommend getting the vinyl. I'm sure a bunch of distros have a straggler or two.
Posted by Batguano at 10:59 AM

most americans seem to care more for Barrack Obama's pet choice than for the 400 infants and children killed in Gaza.it's really a shame.thank you Batguano for showing that some americans still care.

It's hard to focus the attention on one thing when so much is going on in the country and world. In that sense, I kind of sympathize with my fellow Americans. But the steady, underlying anti-Arab sentiment over here is embarrassing and even shameful...