Song Of The Week: "The Trail" (Three Mile Pilot) 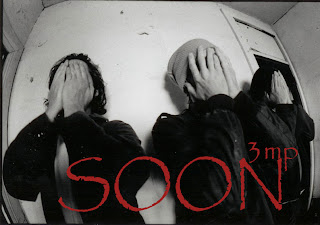 This song of the week arrives a little bit late. I'm probably the only one who noticed, but since I started doing this as a way to be consistent I feel like an explanation is due. Last night, I was fortunate enough to witness the long-awaited return of possibly the best band San Diego ever produced-- Three Mile Pilot. I furthermore have no Internet connection in my house for time being. So I sit here in public, stealing some one's WiFi connection, and the choice for the week seems all too obvious. The band didn't play any tracks from their singles, sadly, so I've chosen "The Trail" to compensate. On few other tracks is the dimly lit corridor to Three Mile Pilot's world more accessibly and alluringly rendered. I can't imagine that too many of the visitors to this blog will find this form of rock appealing at first. Start with the bass work. 3MP features the most talented bassist I've ever had the pleasure of seeing perform (I've seen him with Pinback, but it just wasn't the same...). Then, follow their fragmented and enigmatic narrative into parts of the human psyche for which you've previously never known entry points.

I recommend everything the band did, other than their first album. The material they played from their upcoming record was a little disappointing, but it had its moments.
Posted by Batguano at 1:11 PM

3mp are one of my favorite bands. Great songwriting, unique sound.

There's something dark and cold in their music which I think can really appeal to those who mostly listen to heavier stuff.

Or to put it another way, if you don't like them you're probably wrong.

Yes! I totally agree. It may take a little getting used to for some. For the heavy-inclined, I would recommend "Chief Assassin To The Sinister" first!

'I would recommend "Chief Assassin To The Sinister" first'

Definitely. I heard 'assassin' after having listened to some of their other stuff and was surprised at how straight-up heavy some sections of it were.

I only got into 3MP because of The Black Heart Procession (I feel like I am showing my age a bit much here) - but I feel like these guys are the indie band aggressive music listeners can love.

The 1st album has its moments - to start with, there's no guitar there; the entire complex musical fabric is created by bass alone + vocals and drums. One Step Ladder, Slow Hand, Unicycle Silencer and Illwrath are all heavy, moody, hypnotic - excellent stuff.

sad,i did not know of this last month....otherwise i would have went.i got to see them quite a few times back in the day,great musicians and ever better people.looking forward to seeing them again this time around.